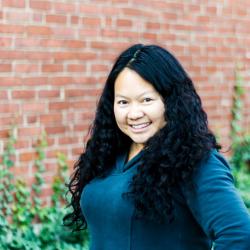 Jenny Ungbha Korn is a feminist activist of color for social justice, a scholar of race and gender in mass media and online communication, and a member of Mensa, the high intelligence quotient (IQ) society. Currently, Korn is a Fellow and the Founding Coordinator of the Race and Media Working Group at the Berkman Klein Center for Internet and Society at Harvard University. Korn’s scholarship has won awards from the Carl Couch Center, the African American Communication and Culture Division of the National Communication Association, the Association for Information Science and Technology, and the Organization for the Study of Communication, Language, and Gender. Drawing on critical race and intersectional feminist theories, Korn explores how the Internet environment influences user assemblages of race and gender and how online producers-consumers have constructed inventive digital representations and computer-mediated communications of identity.

The contents of this article are based on my translation of my verbal presentation that relied heavily upon visuals into published text. I thank Tarez Graban for this opportunity to contribute my work to the Peitho journal.

Upon deciding how I would contribute to a plenary panel on intersectionality for the Coalition of Feminist Scholars in the History of Rhetoric and Composition (CFSHRC), I immediately thought of Kimberlé Williams Crenshaw’s (1991) seminal work in advancing the term “intersectionality” into academic and popular usages. For my own research that examines representations of race and gender in mass and digital media, I find it useful to define what I mean when I reference “intersectionality.” Representational intersectionality focuses on cultural constructions of women of color in popular culture (Crenshaw, 1991).

I shared from my research about how representational intersectionality manifests online in terms of oppressions via the reproduction of racial and gender hierarchies (Crenshaw, 1991). When I have examined representations of “professor” in an online image search (Korn, 2014), I have discovered that dominant gendered (men) and racialized (White) ideologies are privileged. The results depict cartoons of White men that are elderly (with grey or white hair) and bespectacled (with glasses) that tend to look like Albert Einstein. Notably, a cartoon of Donald Duck shows up as an image for a professor before women of color do! Omissions of women of color from algorithmically-driven results reflect the normalizations of racism and sexism in online searches (Crenshaw, 1991; Noble, 2018).

From additional research (Korn, 2016), I showed how women of color have used Facebook Groups to define our own representational intersectionality across activism, sexuality, beauty, and hobbies in uplifting ways that center race and gender as axes of identity to celebrate. As social distance from White heteronormativity increases, communities of color adopt difference as homophilous self-categorization to create counter-narratives to the typical stereotypes that depict women of color in inaccurate, negative, and harmful ways.

After presenting on representational intersectionality as theoretical framework and online examples, I emphasized how intersectionality may be used as an analytical tool. Specifically, an intersectional analysis offers both an intellectual and political response to the issue of representation (Crenshaw, 1991). In terms of a political response, I ask how homogeneous are the rooms for programming, coding, computer science, engineering, and open source communities. Disproportionate impacts of technology will always fall on our communities of color, until and unless we work actively to include minoritized populations. When people of color and discussions of race are omitted and avoided, then Whiteness is reproduced. I urge the people that impact and influence the technological systems that increasingly are becoming how we work and socialize to question for whom does their work benefit.

As the last slide of nearly all of my presentations (Korn, 2019), I remind the audience to engage in the academically activist act of citing women of color. Diversifying our sources is an important practice for academics to disrupt the reproduction of Whiteness in our own fields of knowledge. I encourage us all to be intentional about including references by women scholars
from minoritized populations.

At the session sponsored by the Coalition of Feminist Scholars in the History of Rhetoric and Composition at the Conference on College Composition and Communication on “Building Out from ‘The Margins:’ New Directions in Intersectionality,” I used Kimberlé Williams Crenshaw’s seminal work to define a specific intersectionality central to my presentation. In her influential article, “Mapping the Margins: Intersectionality, Identity Politics, and Violence Against Women of Color,” Crenshaw (1991) explains that representational intersectionality focuses on oppressions via the reproduction of racial and gender hierarchies in popular culture. During my presentation, I also highlighted Crenshaw’s (1991) definition of an intersectional analysis, which may offer both an intellectual and political response to issues related to representation, showing how intersectional feminists should be encouraged to get involved in influencing policy and promoting justice. I closed my presentation with a call for academic activism through reviewing one’s citation practices to ensure that references are diverse and include women and minoritized populations.

As I perused the feedback of the session’s attendees, I noted the following comments that reacted to points made on intersectional analysis and citation practices during my presentation: 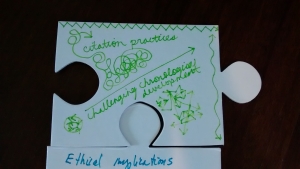 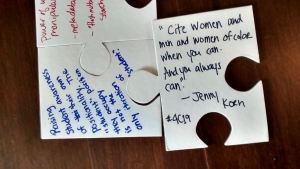 Overall, I am thankful for such an attentive audience that took the time to share their reactions to the night’s presentations. I conclude this response with appreciation for all of the attendees, especially the one that wrote, “Thank you for these brave and powerful presentations.” I am grateful to have been part of this session.